Have you ever wondered what happens under the ice in the winter?

What allows life to continue under multiple feet of ice? It’s an interesting cycle in our lakes that allows fish to sustain themselves and aquatic life to continue. This is due to our lake temperatures varying throughout the year through processes of stratification and thermal mixing.

Have you ever been swimming and experienced a sudden drop in water temperature near your feet?

What you are experiencing is Thermal Stratification: When lakes divide into different layers of density due to differing temperatures. Remember water density depends on its temperature. The warmer the water, the less dense it becomes. Water is at its densest closest to 4°C. Water becomes less dense above and below this temperature.

During the summer, the lake is stratified because water is warmer near the surface and gets colder the deeper you go in the water column. As summer transitions to fall, the water near the surface cools, eventually to 4°C (the temperature where water is most dense). As temperatures change, causing warm water to rise and cooler water to sink, the lake undergoes a mixing process. This mixing occurs in both spring and fall. The slight mixing action is a vital part in distributing oxygen and nutrients throughout the water column to support fish and other aquatic life through the summer, but more importantly, the winter.

In the winter, the water near the surface cools, even more, decreasing the temperature below 4°C, and keeps cooling until it eventually freezes. The ice and snow on the surface insulate the water below so that it doesn’t completely freeze (most lakes and ponds don’t completely freeze because of this). Throughout the winter, oxygen levels in the lake slowly decline. Though, fish are still active in the winter. 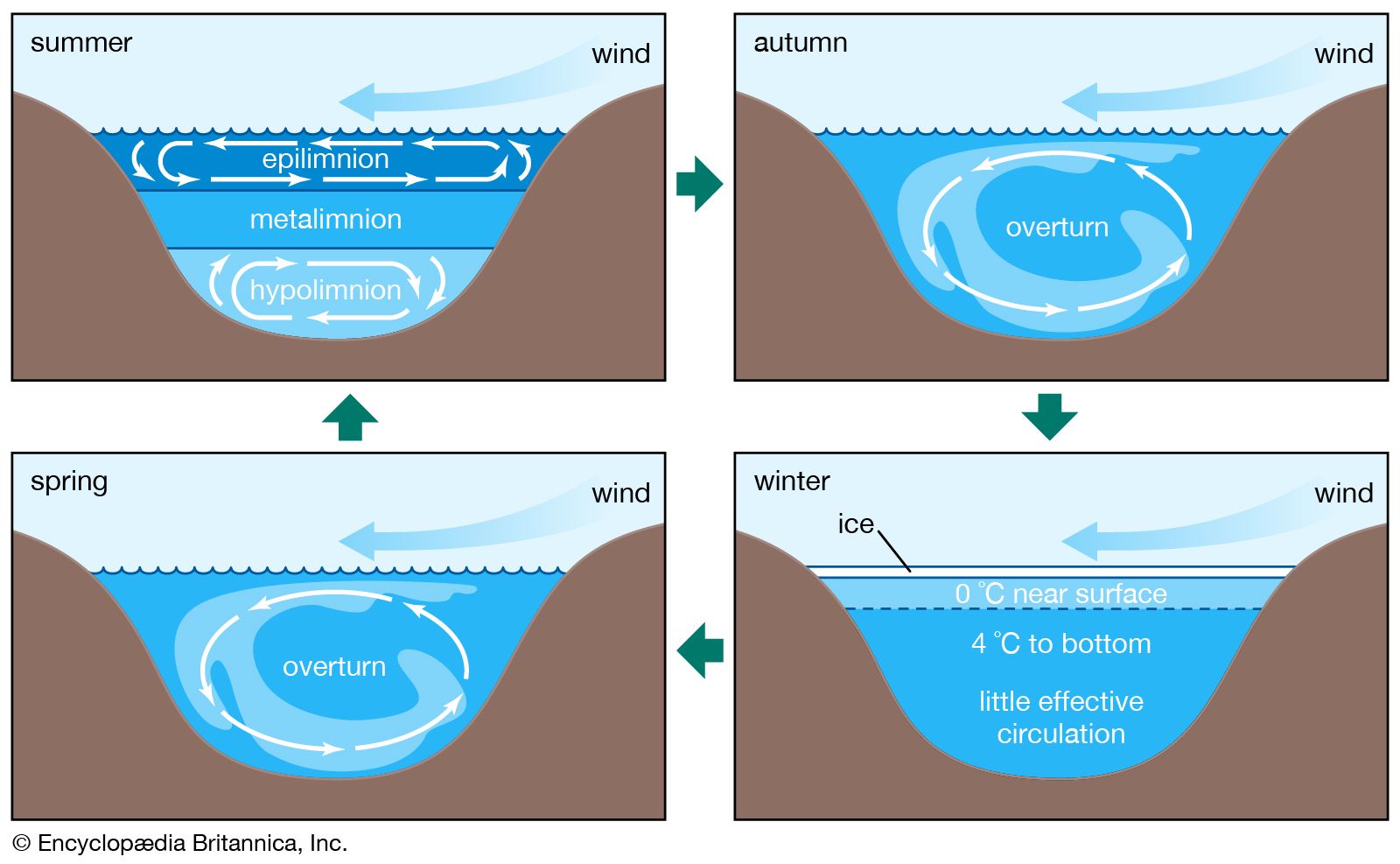 Fish are cold-blooded, meaning their body temperatures match the environmental temperatures they are in. Their body temperatures reduce, and their metabolism slows. Different fish species are classified as cold water, cool water, and warm water. The cold-water species (Ex: Lake Trout) stay active under the ice preying on other organisms. Whereas the warm water species (Ex: Common Carp) remain in the warmest water they can and use as little energy as possible.

Most of the micro-organisms and amphibians settle to the lake’s bottom and enter a state of dormancy through the winter, like hibernation. Also, many aquatic plants die back, but their roots remain intact, and they grow back in the spring when mixing occurs once again with the open water, replenishing the water-borne oxygen used up in the winter.